Some of Gina’s work was selected to take part in a prestigious exhibition at the K35 Gallery in Moscow.

She joined fellow artists including Franziska Klotz (Germany) and Marina Fedorova (Russia) in a group exhibition entitled “Filling the Void”. Curated by Maria Saava “Filling the Void” is an exploration of emptiness in modern day art. 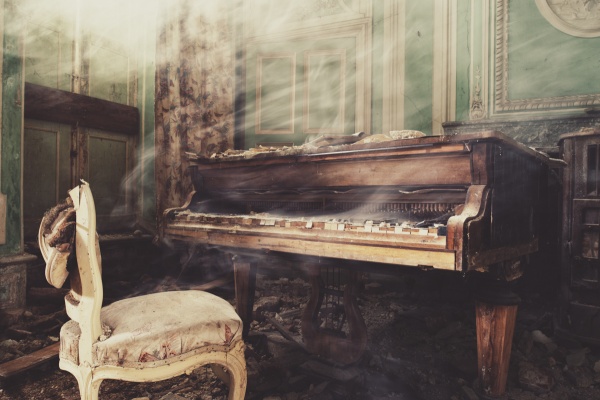 Below is a revision of the Press Release from the K35 Gallery that I have adapted for my UK audience. To read the original release in full, click on the image above.

“So evocative is the theme of desolation and abandonment that a philosophical interest in the portrayal of emptiness in art that began in the days of Plato continues to this day. There is a great variety of interpretations on this subject which has been demonstrated through the ages.

The theme of emptiness – as a symbol of neglect – was particularly popular among French painters in the 18th Century. On the canvases of the artist Hubert Robert, ruins of ancient temples hint at the transitory nature of all things. Fractured by time, his romantic images of palace halls and gardens act as a symbol of the eventual return of cultural creations to a natural state.

During the 20th Century the theme of desolation and abandonment continued. We can find references to this timeless metaphysical question in the abstractions of Malevich, the musical experiments of John Cage (composition 4’33) and in the work of Yves Klein and the classic American conceptualist Joseph Kosuth.  Among the Masters of figurative art stands Edward Hopper. An artist who was indifferent to Modernism and demonstrated his own vision of emptiness. The characters depicted in his paintings appear to be at the very mercy of time. Forever waiting for something in empty cafes, hotels, gas stations and even in their own homes. Hopper fragments their works in such a way as to give the viewer a sense of involvement in this empty, lifeless environment where only light reports this strange feeling of loneliness and detachment.

Continuing this timeless affair with emptiness, the artists presented in “Filling the Void” at Gallery K35 provide a modern interpretation on the theme of empty space. Each artwork on its own fills this void, or allows the viewer the opportunity to fill the canvas with their own thoughts, experiences and emotions.”