I visited this beautiful chateau in June 2012 on my first European road trip, where I travelled to Belgium, The Nederlands, Luxembourg, Germany and France over a period of 7 days with my partner and 2 friends. Quite mad really, considering that we drove the whole way and saw so many locations. This was to be a trip that formed the basis of first series, Retrogression. I didn’t know that later that year, it would be shown at The Groucho Club, let alone bought by private collectors. It was one of my favourites pieces from my first series as I had wanted to go for a long time. 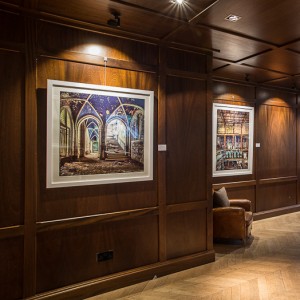 Blue Orphanage in The Groucho Club

I fell in love with the majestic abandoned castle as soon as I laid eyes on it, and so did the people that saw the artwork in The Groucho Club as it quickly sold out in the standard size. It is still available in the small size – Blue Orphanage.      Information on prints here
It’s one of my most memorable locations to date for it’s sheer beauty, fantastic history and the adventure surrounding the visit. I will always be fond of this piece.

Before and After. The great hallway

When I arrived, I remember driving through long winding roads in a deep valley. The grounds of the chateau are almost the same size as the neighbouring town. I parked up, got a few supplies together and donned my waterproofs as I was expecting a heavy shower. I had heard of a way to get to the castle without being seen, a long steep scramble up the hill surrounding it. I decided instead to walk through the forest and I am so glad I did – even though it was tipping down with rain. It was beautiful. The smell of the rain on the ferns, the birds singing and then finding this stone bridge in the forest was great. It must have been the original long driveway to the chateau. 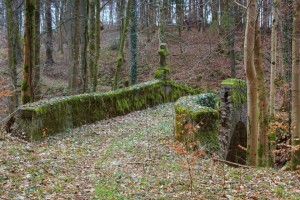 When I finally reached the front of the castle without getting spotted by the infamous groundsman (apparently who used to brandish a shotgun) the first thing I did was take a photo of the outside, just in case I was caught, I’d always have that memory of the impression it made on me. Tall, majestic and fighting against nature. 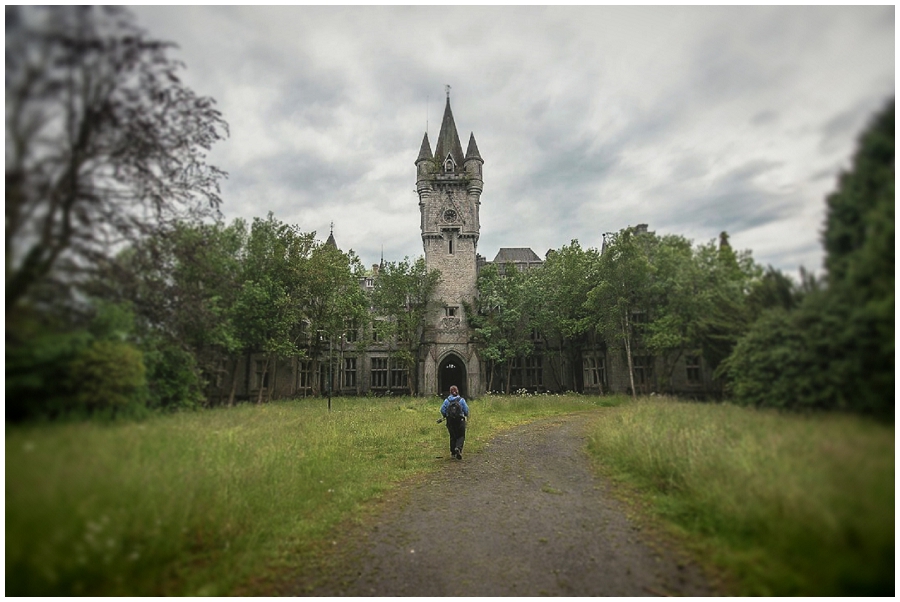 The chateau was planned to be built with towers and conical roofs in a neo-gothic style. The architect did not get to finish the castle as he died before the building was completed. It was continued by another architect, who extended the Chateau largely. 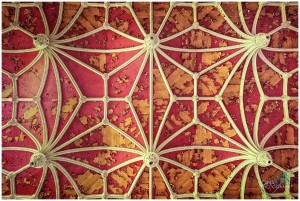 The clocktower is over 170 feet tall and the whole project was completed in the early 1900’s. Initially this chateau served a family as a summer residence. It boasted beautifully landscaped gardens which would be a great setting for a family. During World War II that the chateau was briefly occupied by German troops. 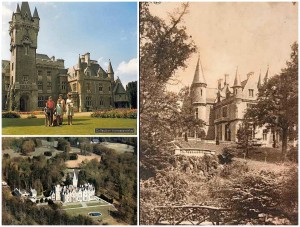 Photographs from different periods of the chateau’s history

From around 1950 the chateau was taken over by a company which used it as a holiday camp for children suffering from ill health. It had enough space for 200 children and provided fresh air, a well landscaped playground and healthy food. There was even a small football pitch and the fountain pictured below was converted into a swimming pool. 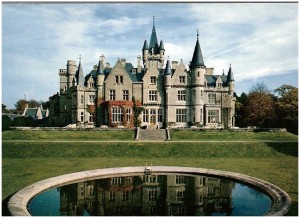 After 1970 it was used for outdoor activities and sport holidays for children, and became well known.
In the 90’s the the owners began to search for investors, hoping to turn the chateau into a luxury hotel. But the rising costs of maintenance and refurbishment meant that the plans failed and it was abandoned in 1991.

After climbing through a smashed window, it was apparent how badly it had deteriorated. I had to scramble through collapsed beams to get into the basement, which had locker rooms and kitchens. I then came up a set of stairs, walked towards the front door and turned around. That incredible hallway took my breath away. A huge staircase with it’s broken stone steps, a vivid blue ceiling with peeling paint and huge arched latticed windows, gothic details and remnants of a former life. I spent about 1 hour just photographing the staircase. Regretfully, I didn’t spend a lot of time in the rest of the chateau as I was running out of time. I would love to go back one last time before it gets demolished. (Edit – I did get to go again one last time)

It was in a heavy state of disrepair, structurally dangerous and despite several offers, the owners refused to sell it. Looking around, the floors were in a sorry state, and many a time I was treading on a very thin surface with a fair drop below me.

It has suffered heavily from vandalism. In 2013, the owners formally applied for licence to demolish this heritage castle. A true crime; I see this a lot.. but for this place in particular I wish it had a different outcome. It was eventually demolished in December of 2017. 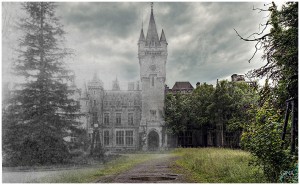 A photo below shows the chateau mostly demolished in 2017. Nothing is left now – What a shame. It was a truly special place.