Kaleidoscope (2016) is a new departure for the British artist Gina Soden. Known for her evocative photographs of abandoned buildings that breathe beauty into decay, her new series breaks into abstract terrain.

Just as a kaleidoscope operates on the principle of multiple reflections, so too do these prints. Soden has flipped, inverted and rotated fragments of her own images of various spaces and architectural components – from tiles to antennas and from ceilings to staircases. The new series signals a departure for Soden since her normal practice is to show a situation in its whole, so much so that we feel we were there with her on the discovery. In these prints our position is completely different, instead we are plunged in to the middle of something and have to work backwards to orientate ourselves. They demand endless enquiry and searching for forms. 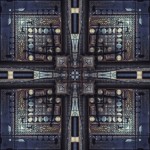 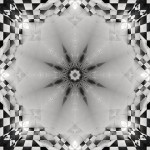 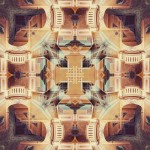 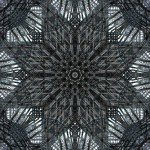 However different the visual effect, the series is born from the same love of symmetry which is at the heart of the earlier series, Retrogression (2012), Decadenza (2013) Emergence (2014) Palac (2015). There is a fascinating duality at play in Kaleidoscope between the organic and the geometric. There is absolute order and clarity but at the same time there is a quiet energy between the spaces, a quality of light that buzzes and tiny hints of decay and ruin amidst the endlessly reflecting forms. It is a game between the real and the imagined- we are given plenty of clues as to the individual motifs that make up the whole, but also the freedom to invent our own details and chart our own visual pathway.

Part sci-fi, part baroque, part ecclesiastical, the series is a beautifully woven tapestry of colour, line, form and above all a declaration of the artist’s passion for symmetry.

The nineteenth century word Kaleidoscope takes its form from Greek ‘Kalos’ – beautiful and ‘eidos’ – shape and literally means ‘observer of beautiful forms’. For years Soden has found beauty in places others might recoil from and she has constantly charted new territory to seek out long neglected structures in Europe. She is indeed an observer of beautiful forms and in this series the viewer bears witness to that in an entirely new way. 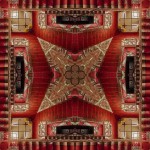 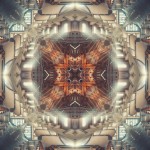 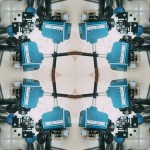 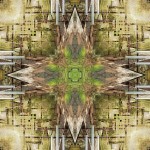 Digital Archival Prints, 60 x 60 cm on Somerset Satin Enhanced 330 gsm
Kaleidoscope works are produced in an edition of 50, Signed and numbered by the artist

For availability and prices please get in touch; info@ginasoden.co.uk